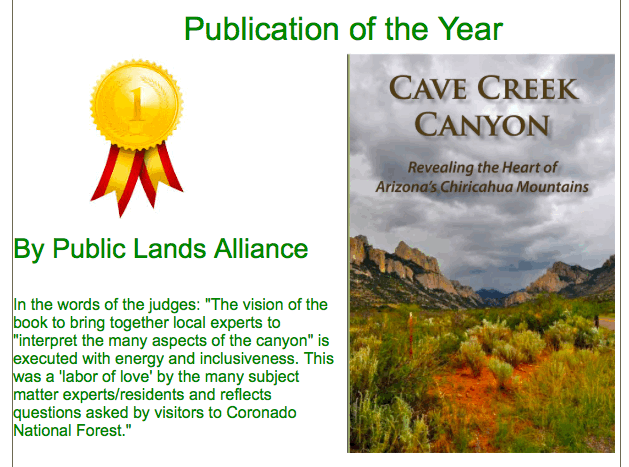 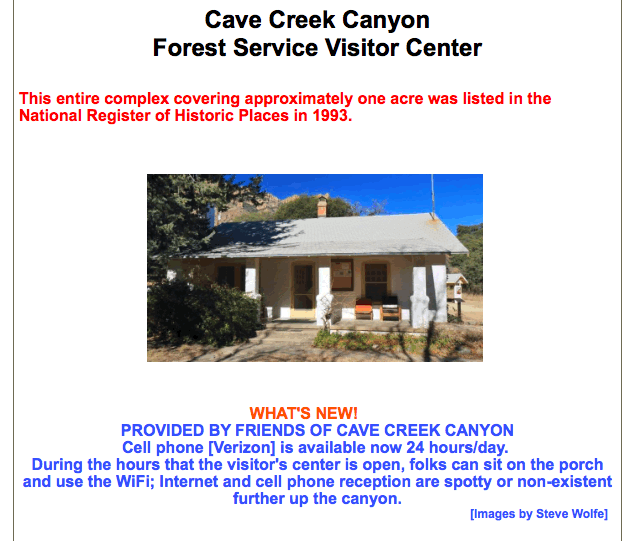 It is critical tokeep water in Willow Tank to provide wildlife habitat. One would have to camp outat the tank to fully appreciate how many birds, bats and critters use the water at WT, let alone the food and cover the vegetation provides. During the 2+ months ofSpring migration and a much longer period during Fall migration, those birds that migrate by day may stop only briefly for a drink or to grab a few insects before continuing out of sight en route to their nesting or wintering grounds.

It is owned by the Larry River's family and we owe a big thankyou to them for their extensive financial and physical help inkeeping this vital water source open.

A few days ago there were 4White-faced Ibis feeding on the pond along with a pair ofMexican Ducks.

Willow Tank is open to bird watchers. There is water onlyin the deep end now as the banks and reinforcing is completed. There will be multiple viewing stations and stairs, which will be completed in the next month or so, followed by the refilling. (Cecil Williams)

WT is on Sulphur Canyon Rd. west off of Stateline Road just as Stateline intersects U.S. 80.

Friends of Cave Creek Canyon strongly believes in preserving and improving this valuable resource. We have made a sizeable donation and encourage you to also help. For more information, contact Alan Craig at 520-558-2220 or acraig@me.com

Why It's Called Cave Creek Canyon!

Friends of Cave Creek Canyon recently sponsored an archaeological survey of the caves and rock shelters in Cave Creek Canyon. We received a generousanonymousdonation of $5000 to offset about half of the associated costs.

Hanson and Patt's survey has demonstrated that caves have served as important focal points for hundreds of years of human history in the area.

Over the course of five weeks in June and July, Kelsey Hanson (University of Arizona) and Jonathan Patt conducted an FOCCC-sponsored archaeological survey of caves in South Fork Canyon and Cave Creek Canyon. Their survey was guided by photographs and notes produced by Kimrod Murphy (retired Game Warden for the Arizona Game and Fish Dept.) and some existing documentation from U.S. Forest Service archaeological surveys.

Hanson and Patt produced updated sketch maps, photographs, and narrative descriptions for 32 caves, many of which contained archaeological features (e.g., hearths, masonry walls, and Mogollon Red and Apache pictographs) andartifacts (e.g., pottery sherds and chipped stone or lithics). Despite some existing archaeological documentation, most of the artifacts and features documented by Hanson and Patt had never been recorded before! Of the 32 caves recorded, 6 contained both archaeological features and artifacts, 12 contained either features or artifacts, and 14 contained neither. This suggests that the caves that were used throughout history, were used for very specific reasons. Explanations for these reasons are pending the results of more detailed analyses but may be related to a combination of factors like elevation, aspect, bedrock stability, and access to resources.

We are a non-profit 503(c)(3) organization, chartered in 2011. All contributions to the FOCCC are tax deductible. We are an all volunteer organization and all donations and membership fees received are used to advance the mission of FOCCC.

We are individuals, families, and businesses. We are mostly from the Rodeo,NM, and Portal, AZ, area, but have members from Lordsburg, San Simon, Douglas and Sierra Vista.

To inspire appreciation and understanding of the beauty, biodiversity and legacy of Cave Creek Canyon.

We work closely with Coronado National Forest to support their work and mission in Southeast Arizona.

We seek to provide educational opportunities for area residents, visitors, school groups, scientific researchers and others who cherish the special qualities of our region. 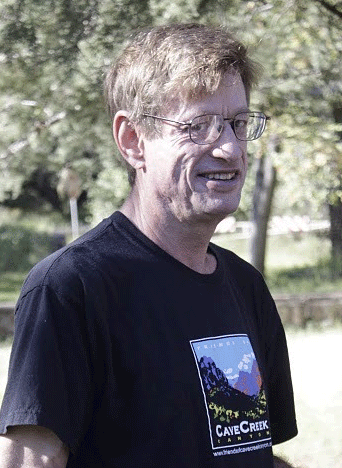 We welcome members and volunteers, near and far!

Special Opportunities. including mention on website and thanks to our "SUSTAINERS CIRCLE"members:

Business Membership includes your business name on all FOCCC emails and website, with a link to your website.

Members will be sent notification of projects, events, and volunteer opportunities.

Become a Lifetime Member of FoCCC!

Never have to remember to renew your membership

FOCCC at work in the Canyon!

Thirteen energetic FOCCC volunteers and one well-behaved doggie turned out to pull invasive horehound on Saturday morning, 07 February. Donning gloves, and deploying various tools, they made short work of a large horehound patch near the first bench along the Nature Trail above the Silver Peak pullout. The group then moved to the Sunny Flat Campground where, starting at the bridge, great progress was made in removing the species on both sides of the road and in as far as the central 'plaza'. (Special thanks go to those working beneath prickly catclaw!) Plants with seeds were placed in bags deposited at the USFS station, and those lacking seeds were left to replenish soil nutrients.

Event organizers Dinah Davidson and Barbara Miller would like to thank the following participants for their enthusiasm and congenial company as a pleasant time was had by all: Al Bammann, Laura Caron, Larry Johnson, Rolf Koford, Juliet Krenshaw, Elaine Moisan, Linda Pretty, Loren Smith, Sarah and Keith Thomson, and Lorraine Titus. Barb and Pete Miller provided water and snacks. Counting participation by Barb and Dinah, the Friends group contributed 39 hours of volunteer service to the USFS. 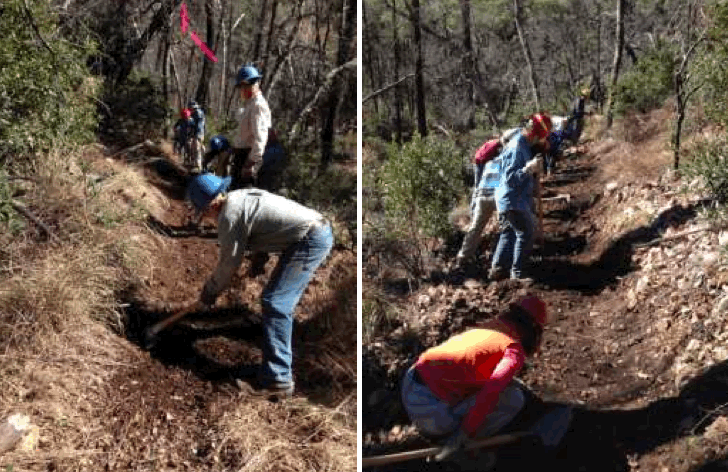 Thanks to our "Sustainer's Circle" members for their generous support:

Please support our Business Members who have given generously to Friends Of Cave Creek Canyon. Without their assistance, we would be hard pressed to accomplish our goals. Click on their names to check out their websites.

Stories of the PastPortal History The Great Jailbreak!

EXCERPTS FROM THE CHIRICAHUA BULLSHEET

The Chiricahua Bullsheet, an entertaining and highly opinionated newsletter and journal of local history written by Carson Morrow

Paradise began to boom when Cap Burns sold his mining claims, which were located at the head of the north fork of what is now called Hospital Canyon to the Chiricahua Development Company in 1903, and Busted during the Money Panic of 1907. The present jail was built at about the time of the Bust or a short time thereafter, so probably never housed more than a half dozen prisoners altogether. However, it was the scene of one of the most spectacular jail breaks on or off any record, anywhere, which was effected by an hombre by the name of Pablo Zuniga, who ordinarily was one of the most un-spectacular "pata de ules" who ever came up from Mexico. Pablo, in his own opinion was a man of considerable consequence and by Chiricahua Standards he was quite wealthy. He had about ten burros and pack saddles, a big fat wife and seven or eight kids, from about 10 years of age down. He could cut and pack into town a cord of wood every day which he could sell, at that time, for two good round American dollars.

Flour for tortillas and Frijoles were cheap so he would frequently get enough ahead to buy a few bottles of Vino and go on a spree. At such time he invariably wore out a few doubles of pack rope on Maria and the kids or striped them up pretty good with the "Tapejo" which he used at other times to whip the burros or to blindfold them if they tried to run away while he was stacking the wood. There was nothing wrong with that in his way of thinking, nor in the families way of thinking either. How were they to know that he was the "Macho" and that he truly loved them if he didn't beat hell out of them once in a while?

They all lived in a small tent with not many holes, had pretty fair clothing and led a happy life until one of the nosey gringo neighbors happened to go by while the Zuniga family was being set to rights and being assured of his undying love by their lord and master and that was the beginning of the end. The neighbor, not knowing that class of mexicans or their way of life, rushed to town and told Mart Moore, who succeeded Luke Short as Constable, that Pablo was beating his wife. Mart couldn't see anything very wrong with that as he had a mexican wife and three half breed kids himself. he had lived among them all his life and knew all their idiosyncrancies (boy, ain't that a dandy word). In fact he had shot and killed three wood cutters in a brawl in Ben Milams saloon not long before. But the complainant was so insistent that he went out and collared Pablo and threw him in the clink. Now Maria didn't understand gringos and their strange ways any better than the nosey neighbor understood Mexicans. Who ever heard of throwing the head of a family in jail for exercising his rights and attending to his duty? She took a big monkey wrench down to the jail and proceeded to twist the bars out of the window before Mart Moore hardly got the door in front locked.

That occurred in the middle of the afternoon. Anyone but Pablo would have waited until night to escape but he was still full of Vino and feeling "muy Bravo" so he crawled through the twisted bars and started climbing straight up the mountainside east of the jail. Evidently the further up the mountain he climbed the more brave he felt. When he got about half way to the top he stopped and started yelling and cursing all the gringos at large and Mart Moore in particular, inviting Mart to come and get him if he was man enough and not a damned coward. He was in plain view of practically everybody in town and his yelling soon afforded him a large audience. In the annals of jail breaking it is doubted that an escapee every had that many eye witnesses. Although he was in a position to see everything that moved in town he failed to see Mart saddling his horse and riding across the creek toward him and when he finally did, it was much too late. He climbed as he had never climbed before but the belly full of Vino slowed him up and Mart overtook him just before he topped out so he layed down on his back and defied anything or anybody in the world to take him back to jail. At first Mart whipped out his pistol, apparently with the full intention of putting Pablo out of business for keeps, but before he "lowered the Boom" he realized that he was in plain view of practically the entire population. Although Pablo was still "playing to the Grandstand", shouting and daring Mart to shoot him, it wasn't the right thing to do under the circumstances. Like we said before, Mart knew his Mexicans, so instead of shooting he put his pistol back in the holster, pitched the lop of his rope around Pablos feet and started dragging him down the mountain toward the Calaboose, a distance of two hundred yards or so.

Just like Mart knew he would, Pablo soon changed his tune and began begging, "Please shoot me like a man, don't drag me like a dog", the physical punishment of being dragged through the boulders on the seat of his pants wasn't what did it. He would have actually preferred being killed to the humiliation of being treated like anything less than the "Hombre Valiente" he felt himself to be at the moment.

So Mart let him get up and walk back to the jail where he was shackled to the "bull ring" embedded in the floor until he sobered up and promised to leave town. Prosecuting him for wife beating was out of the question as Maria absolutely refused to testify against him.