It’s Full, But Are Those Inches Or Feet?

The Forest Service is calling it the 500-Year Flood. Others are comparing it to Katrina, Johnstown Pennsylvania, and Noah. Whatever - we had water where no one living here today remembers water! New creeks popped up everywhere. On September 17, twostorms fromBaja created a deluge the likes of which we have never seen. Fortunately, as far as I know, only the creek-side cottages of Cave Creek Ranch had serious indoor flooding. There are reports that some of the straw bales in Morgan & Johns’s new house were wet. This page will begin to tell the story in pictures, stories and even song (if someone sends me a song). But, as they say, you had to be here to believe it! 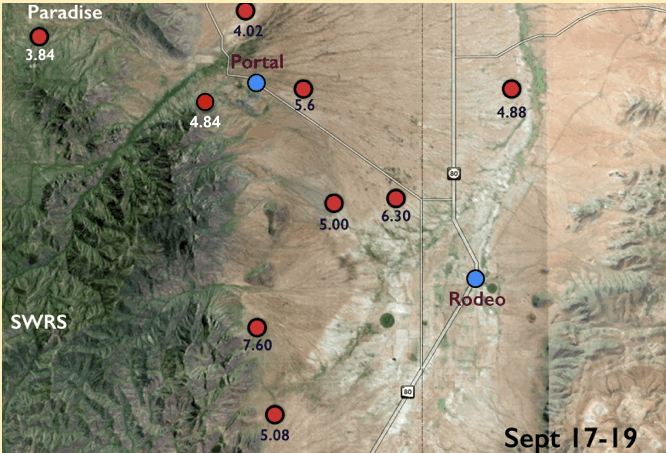 At about 6:30 am on Thursday (September 18), two Border Patrol agents, a representative from the Sherriff’s office and Walter Schoepfle transported Gloria from her house to mine. The creek was up against the very edge of her porch, but no water entered the house. The Sheriff snapped this photo and sent it off to NBC news. By the time it was aired, the story said that Howard Topoff had rescued not just Gloria but two women, water up to their knees, and the house heading down stream. We are still looking for the second woman, who may have been relocated under the Witness Protection Program.

I will not be appearing on the Today show until the story has blown up to the point that the women were drowning, I had to pump water out of their lungs, and that I used a lasso to restrain the house and drag it back up stream!

The Flood At Gloria’s House

Rain Amounts During The Flood

Used To Be A Road Here (Rene &Tony Donaldson)

Huge Drifts Of Trees Against The Bridge Abutments. Forest Service Gets Points For Great Construction.

Exactly How Many Poles Went Down?

How About A Yard Sale. You Can Own A Piece Of The Canyon Road

Could Be An Olympic Diving Platform

Bear Dropped Its Lip Balm In The Mud

Before Idlewild Campground -Troll Bite Out Of Road (Harold Farmer)

This Says It All (Alicia Davidson)